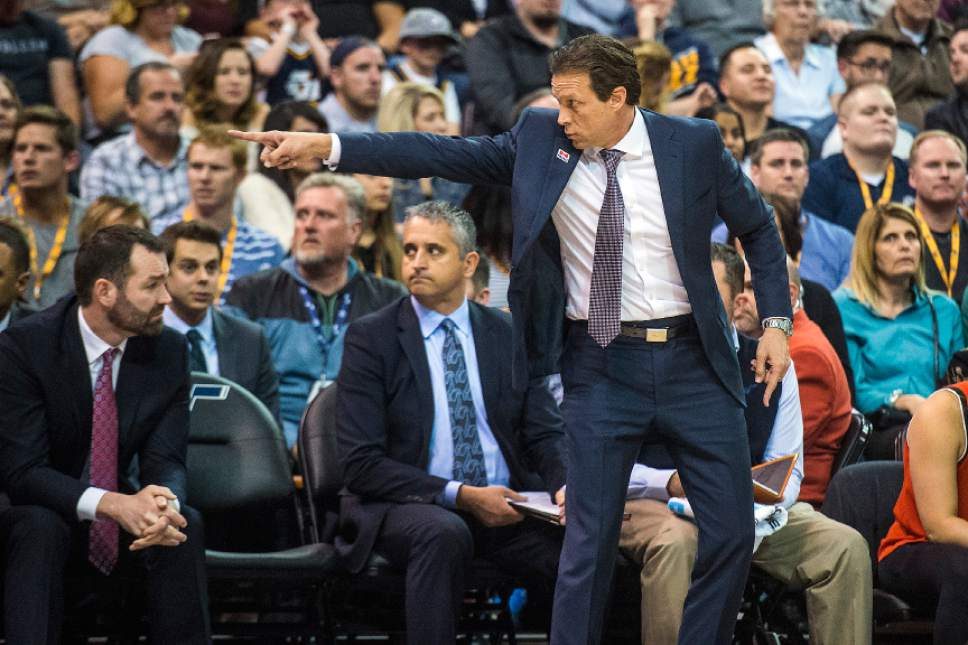 Who didn’t see Russell Westbrook’s fueled-up foul parade coming in Game Four? After Jazz guard Ricky Rubio lit up the Thunder for a triple-double in Game 3, Russ epically vowed to “shut that sh*t down.” He did. For awhile. Rubio was quiet early, content to play possum and lure Russ into overplaying and the first half fouls. The Jazz steadily seized control as Westbrook “controlled” Rubio; the Spaniard eventually had his way (13 pts, 8 ast, 6 rebs) when Russ and the Thunder self-destructed. It resembled a bull-fight: Westbrook, enraged in the arena chasing the cape, Rubio and the Jazz playing knowing matador.

The opposing paths to the NBA Playoff limelight for Thunder coach Billy Donovan and Jazz coach Quin Snyder shouldn’t be lost on anyone. It certainly stuck out to me on Monday as Snyder took Donovan to school in every subject—not even counting Billy D’s colossal misstep of leaving Westbrook on the floor to accrue the fourth foul with just seconds to go in the first half. Snyder was masterful, controlling the explosive tenor of the game from the bench while his decisive team controlled the space on the floor.

The 51 year old Snyder, effectively buried in 2006 after his tenure at Missouri bottomed-out amidst NCAA scandal, has clawed his way out of the dirt, like Beatrix Kiddo from Paula Schulz’s lonely grave.

Quin’s climb was the D-League grind, a stint in Europe, and three assistant spots on NBA benches. He landed the uninspiring Jazz job in 2014 and took Utah from 38 to 51 wins in two years. He’s now a frontrunner for NBA Coach of the Year. Meanwhile Donovan, he of two NCAA titles at Florida and undeniable, Pitino-type panache, was twice handed the keys to an NBA kingdom right out of Gainesville. Remember he accepted, then turned down, the Orlando Magic job in 2007, with Dwight Howard in his prime. The Thunder offer in 2015 was too much to resist. But even with Kevin Durant, Russell Westbrook, and now Paul George and Carmelo Anthony, Donovan has yet to win anything more than his predecessor, much less meet his own welcome in Oklahoma City. Now he stares a second consecutive first round exit in the face. Current advantage: Snyder.

Speaking of Anthony, the former scoring heavyweight looks like a shot fighter. Monday night’s 11 point, 5-18 (27.8%) output was the low-point in a series that’s seen little other than ugly misses and typically slow rotations from Melo. He’s managed 14.3 points over the four games—a significant drop from his season total of 16.2 and nearly ten below his career average. The inside numbers paint a worse picture: 37% shooting on a healthy 59 shots, 7-31 (22.6%) from three, and two assists (two!) in 142 minutes. Anthony could “get you 20 out of bed,” but has yet to hit the mark against Utah. Donovan gives him plenty of opportunities in isos and post-ups, and Anthony will never quit shooting. Give him that much. But you have to wonder if it’s fruitful for Billy to keep sending his creaky fighter out there in that respect.

Can we talk about how fun this Jazz team is, and how no one seems to know it? Why is it that NBA fans outside of Salt Lake City never have love for the Jazz? Maybe this is just my own unknowingness. But I get the sense even from hoop heads that despite seven playoff trips in the last twelve years, Utah still excels in relative anonymity. They’re rarely on national television. Certainly it’s the market size, though Cleveland and Oklahoma City disprove that. Perhaps it’s the fact that the Jazz haven’t had a true superstar since John Stockton and Karl Malone. It could be that Michael Jordan ended them so often, so memorably that NBA fans won’t entertain any other Jazz-related narrative.

This Jazz team is typically tough on defense, but more fun than past editions. They have an instant, modern superstar in rookie Donovan Mitchell, who twisted, turned and jump-tossed his way to 33 pts in Game Three. Flashy point guard Ricky Rubio has raised his rounded-out game in the playoffs, and big man Rudy Gobert is one of the league’s most impactful players above the rim. Then there’s 6’8 Australian swingman Joe Ingles, who plays the type of frustrating, fill-the-stat-sheet game that makes Lance Stephenson envious—and Ingles can actually shoot. The Jazz are plucky, tenacious and awfully tough to beat in front of a Salt Lake City crowd that goes crazy for that type of team. I’m falling in love with them, too.

Is Shaq awful? My friend texted me the following during TNT’s halftime coverage: 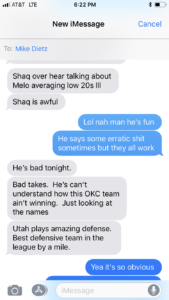 Both points seem fair. Shaq isn’t always Hubie Brown when it comes to breaking down the game, but a lot of solid analysts say blatantly out-of-touch shit if they do it long enough. It’s not really what O’Neal is up there for, either – “Big Aristotle” or not. The whole lasting brilliance of Inside is its entertainment value: the silliness, the fun, the ability to laugh with and at everyone else. Barkley dictates it, Shaq augments it, “Jet” clowns it, and Johnson somehow directs it. It’s a formula that’s made it the best live sports show on television for two decades. Even if the takes are heinously bad from time to time.